Since last I posted to this blog.  I have been in a lot of pain.  My back is still messed up royally.  Luckily I don’t have to wait til August 17th anymore, I am seeing the pain doc this morning (not why I was up at 4:30am, that was cuz of pain, not to get ready to see the doc).  The nerve damage in my neck/shoulder area is really working me over.  At times a pain level of 7 or 8.  It also messes with my right arm and causes my right hand to tingle.  Really annoying.  The rest of my back is doing ok on Flexeril, but my regular doc only gave me like 10 days of the stuff and my original appointment was a month away.  Oy.  Anyhow, I get to see pain doc today.  Hope to get some relief from that.

Seems I am not getting enough sun (surprise).  Furthermore, for some reason my hemoglobin, white blood cells, and platelets all decided to do a downer.  Combine the two and ta da you have a pale guy.  This prompted my cancer doc to order a bone marrow biopsy.  This one didn’t hurt like the last few.  Nice tall doc had leverage to get in and get it done without all the moving around.  It was achy for a few days, but its better now.   The results of the biopsy said my blood contains 4% blasts.  Blasts are the bad white blood cells that come with being leukemic.  According to my cancer doc’s nurse 4% is normal for a leukemia patient so I dodged a real bullet this time.   I wonder what the %age is that prompts concern?  And if this means that I will have problems in the future?

I put my D&D games on hold during this leukemia business.  I couldn’t think of anything else.  But we are set to resume August 2nd and August 4th respectively.  Gives me time to think and be prepared.  Even though it was only a week we missed, it seemed like longer.  I really enjoy running these games.  I know I have mentioned that many times before, but it’s true.

Teresa had decided that if I did end up back in the hospital she was gonna buy me a new gaming laptop.  I found what I wanted for 1299 at http://www.ibuypower.com a really nice Asus Rogue 15″ laptop, 17″ laptops are just too unwieldy.  Well, I guess that I won’t be getting a new laptop any time soon.

I am thinking of cancelling my vacation plans for next year.  Get the money I have invested back.  Leukemia is a real concern and I really don’t know if next year I will be able to go.  I have other things I could use that money for (see aforementioned gaming laptop).   And I wouldn’t have to worry about if I get sick between now and then.  I know it’s a once in a lifetime chance for me to go on this trip, but what fun would it be if I got all excited and ready and then life smacks me upside the head again and says No, you can’t go.  I hate planning my life around potential health issues, but this one is seriously a when and not an if.  I need to talk to my cancer doc, I need to talk to my mom.  Cancer doc to see if he thinks there is any chance of problems within the next year (hmmm, he just did a bone marrow biopsy, so I think his answer would be yes).  Mom because this is her once in a lifetime chance to do the cruise too and I would be squishing it for her as well.

Teresa is in New York again for work.  She went even before we got the good news about the biopsy results.   Her work told her if they came back bad they would fly her back immediately.  I thought that was cool of them.  Mediacom has treated us good over the years.  I know why Teresa is against the idea of starting over anywhere else.  Facebook offered her a lot more money to come work for them in Altoona.  She politely said “No”.

The little office area we set up for me in the bedroom is working out great.   Plenty of storage for all my stuff and all the electronic stuff (computer, printer, etc…) is now up off the floor.  Which is a good thing.  Even old(er) computer stuff is being put to use or will be rather.  Gonna set up an apache server (http/web) and mumble server on an old(er) pc which had a problem running dual monitors.  Well, since I only need it to run 1 monitor, it’s all good.

Been playing Skyrim a lot again.  I really love the game.  I think it’s the best PC RPG to come out in a long time and I don’t think any have come out since.  Yeah, the graphics are kind of outdated, but its a 6 year old game.  I tell ya, it still holds it’s own.  I picked it up cheap last Christmas and I have probably 2000+ hours logged into it.  I am a Skyrim junky.  I am currently playing the highest level character I have played and still having fun with him.  I normally have the attention span of a gnat when it comes to games like this, but I think I found the guy I want to play to the end so to speak.  A dual wielding lizard with dragonscale armor and dragonbone swords.  He started as a thief, but has evolved into so much more. 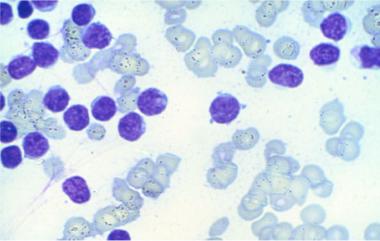 The dark dots are Blasts in a leukemia patients blood.  Blasts are immature white blood cells which are released in the blood stream.   It takes 20%(or more)  blasts to be considered having leukemia, I was at 4%.  So, for now, I am good.

I am 50 year old guy, who beat blood cancer but is getting his butt kicked by bone marrow cancer. At this point it appears I am dying. Married and in love with the most wonderful woman in the world (27 years). She has stood by me thru a lot of crap and I love her so. View all posts by Jeff Campbell